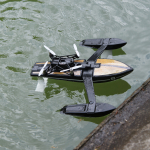 With the popularity of quadcopters, you can say they are quickly on their way to dominating the skies and now, the next generation of drones are coming with amphibious capabilities and heading for our waterways.

The Parrot Orak minidrone is a perfect example of an amphibious drone. The drone is just as agile on the water, as it is floating 2 inches above it. I expect this to be sold as a toy since it falls into the minidrone category. Purchasing the Orak will actually get you two toys in one, because you can have adventures on water with the hydrofoil or you can remove the hydrofoil for airborne fun.

When released, the Orak should provide lots of enjoyment, at a reasonable price point.

Once the engines are on, the upper part of the Hydrofoil positions perpendicularly to the nautical structure. Thanks to the four propellers of the Minidrone, it glides through the water and stays about 2 inches above the surface with amazing stability and agility. As the water resistance is reduced, it can reach the maximum speed of 5.4 knots (6 mph) and turn in a flash without capsizing. The Hydrofoils can be separated from their nautical structure in order to fly through the air and do breathtaking aerial acrobatics! 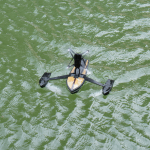 Even though the Orak hasn’t been released yet, it’s already getting pickup in the press:

A French firm has announced two hydrofoil minidrones that sail at 10km/h (6mph or 5.4 knots) on water before taking off and flying at 11mph (18km/h).

They have built-in video cameras that record at 60 frames per second and can reach distances of up to 60ft (18 metres).

The hulls of the waterborne drones have been built with special hydrofoils inspired by racing yachts.

When they hit top speeds, these foils lift the device around two inches (5cm) out the water, at which point the four rotor blades attached to hull flip forward and provide thrust to lift it into the air.

Henri Seydoux, founder and chief executive of Parrot, said: ‘The success of our first minidrones pushed us to enlarge the family of these super high-tech toys.

The drone gets its sea legs: £120 hydrofoil-quadcopter seamlessly films from the air and on water – but it only reaches a top speed of 11mph

I’m not sure I like using the word drone, even minidrone, in the same sentence as the word toy, but it’s bound to happen. Regardless what you call them, drones should be respected and beginning pilots should try to learn safe flying techniques, hands-on whenever possible.