Here is a story that I’m not too happy about reporting. In Pasadena, California, an 11-month-old girl was indirectly injured by a drone crash. The operator, according the source article, was not following FAA guidelines. Apparently he was flying outside of his line of sight while piloting his DJI Inspire 1 and, for still unknown reasons, control was lost. When the operator lost control, the DJI quadcopter crashed, and debris from where it hit bounced and hit the little girl. The results were a quarter-inch cut on her head and a bump on her forehead. I expect more from a DJI Inspire 1 operator. It’s not what I consider a hobbyist craft.

A falling drone cut and bruised an 11-month-old girl in a stroller at an event Saturday, according to the Pasadena Police Department.

Police said a 24-year-old man lost control of his DJI Inspire 1, a camera-carrying quadcopter costing nearly $3,000, causing it to crash to the ground outside of City Hall during a movie screening.

“It lost its signal and ultimately crashed on Marengo Avenue and the debris from hitting the ground went out and hurt the child,” said Lt. Mike Ingram, with the department’s air operations. “It could have been much worse.”

The little girl received a quarter-inch cut on her head and a bump on the forehead, police said. She was treated at Huntington Memorial Hospital and then released.

It’s unclear what caused the drone’s descent, but police said the operator flew outside his visual range, losing track of the quadcopter. The operator did not face any charges, but police forwarded the accident to the Federal Aviation Administration’s Field Standards District Office in Van Nuys for review. The FAA could fine the operator if he’s found to have flown recklessly.

As the article mentions, the police forwarded details of the incident to the local FAA office. We will just have to wait and see what the official FAA response is. The drone operator could face fines from $1,000 to $25,000, depending on how serious the FAA considers the violation.

To date, the FAA has already initiated over 20 enforcement cases, settled five where the operators paid fines, and proposed penalties in at least five more cases. 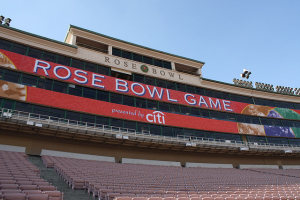 The city is known for hosting the annual Rose Bowl football game and Tournament of Roses Parade. In addition, Pasadena is also home to many scientific and cultural institutions, including the California Institute of Technology (Caltech), the Jet Propulsion Laboratory, Fuller Theological Seminary, Art Center College of Design, the Pasadena Playhouse, the Norton Simon Museum of Art and the Pacific Asia Museum.

Pasadena residents and residents of the greater Pasadena area who are interested in drone college courses should consider Drone Universities first. We offer a wide range of drone operator courses that prepare you for real-world careers. Classes are offered at our new Section 333 Exempt Drone training center and various cities throughout the United States on a rotating schedule.