As a long time resident of San Diego, California, I enjoy seeing our local landmarks being filmed by drone. If you liked Jeff Morris’s – “Above San Diego” as much as I did, then you will probably like “Good Morning, San Diego!” too.

My personal tribute to the beautiful city of San Diego (California, USA), where I’ve had the pleasure to live for almost 15 years. All the scenes in this video were captured around sunrise over a period of four months, from August to November of 2014. Shot entirely using a GoPro HERO3 Black Edition camera (1080p, 60fps, Medium FOV) mounted on a DJI Phantom 2 Quadcopter with Zenmuse H3-3D 3-axis gimbal. Edited using Adobe Premiere Pro CS6.

This video was made solely for hobby and recreational purposes. Filming locations were researched and selected in July 2014 taking into account recreational flight safety guidelines reported in the news at the time. More succinct guidelines were widely publicized later that year, including the “Know Before You Fly” educational campaign at knowbeforeyoufly.org that started in December 2014. Visit faa.gov/uas for the latest U.S. Federal regulations on unmanned aircraft systems. Please fly safely.

Music: “A Closing Statement” by Dexter Britain.
Used under license from The Music Bed, LLC.

Great video and you got to love Eladio’s strict adherence to FAA guidelines. 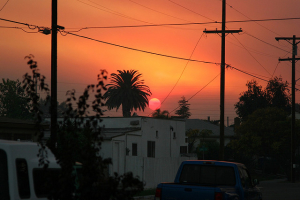 San Diego is a large and pleasant coastal city right on the Pacific Ocean in Southern California. It’s home to 1.3 million citizens and the second-largest city in the state with many universities and good swimming beaches. It’s also known for its ideal climate, bio and communications technologies, long history, nightlife, outdoor culture and ethnic diversity.

The city sits just north of the Mexican border, across from Tijuana. Though a large city, San Diego has a somewhat slower paced atmosphere and, when visiting, some may find it provides a soothing break from the typical hustle-bustle of a city of its size.

Drone Universities is based in San Diego, specifically in La Jolla. In San Diego we offer our Light-sport Certification course those who want to pursue a Sport Pilot License (SPL). We also offer our complete curriculum of drone college courses on a rotating schedule. With our flight school local in San Diego, it’s easy to become a “commercially ready drone operator” graduate and receive a free Section 333 Exemption.