Would You Consider A Driverless Taxi A Drone?

Home/Drones/Would You Consider A Driverless Taxi A Drone?

Would You Consider A Driverless Taxi A Drone? 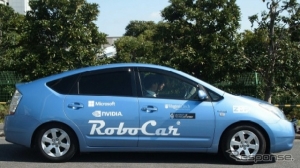 When considering this blog posting, I had to decide if I considered a driverless car a drone, specifically a driverless taxi. Since a taxi will operate, at times, both autonomous of human direction and empty, then yes, I believe it does qualify as a drone. While not a UAV or UAS, a driverless taxi qualifies because it functions at times as a unmanned vehicle.

In the US, most of the driverless vehicle publicity goes to Google, but that’s not true around the world. In Tokyo, Mobile games giant DeNA has partnered with robotics firm ZMP (the same firm working with Sony on Aerosense) and they have a lofty goal. They aim to provide robot taxis for the 2020 Tokyo Olympics.

Mobile games giant DeNA hopes to begin a robot taxi service in Tokyo by 2020, joining Uber Technologies and Google in the race to offer self-driving cabs and cars.

“Our dream is to have some unmanned taxis for the 2020 Olympics in Tokyo, which would impress people everywhere,” Hiroshi Nakajima, a senior vice president at DeNA, said at a news conference Thursday in Tokyo.

The company didn’t give details about its plans or set any firm milestones for deployment. But one advantage it has is a partnership with Tokyo robotics company ZMP, which has been developing robot car platforms, sensors and camera technologies for years.

DeNA and ZMP have set up a joint venture, Robot Taxi, that they say is the world’s first to be exclusively dedicated to unmanned cab services. Some of its users would include elderly, handicapped and people living in rural areas, ZMP CEO Hisashi Taniguchi said.

Interestingly enough, both Google and DeNA/ZMP are using the Prius as their driverless car platform. While DeNA/ZMP admit Google is ahead, they have stated they will be more focused on user experience than the Google team.

ZMP INC. is an established company which specializes in supplying robotic teaching tools to Japanese universities.   The company was founded in January 2001 in order to commercialize the results of the Kitano Symbiotic Systems Project, under the jurisdiction of Japan’s MEXT. The name of the company comes from the robotic walking algorithm Zero Moment Point.

ZMP released the first humanoid robot designed for the consumer market, PINO®, in 2001. Like GeckoSystems CEO Martin Spencer, ZMP CEO Hisashi Taniguchi is now focusing on robotic solutions that can be used in daily life.